Are you happy with how you funded college? 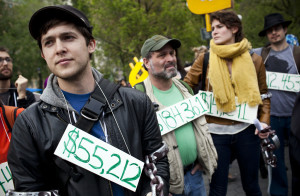 According to a new AICPA survey, the majority of Americans say they would have paid for college differently if they had the chance to do it again. In fact, 68% of adults with college loans or whose children have loans said they regret how they financed their own or their children’s education.

What’s alarming is that 84% of survey respondents said that, if given the chance, they would change at least one of the choices they made about it. The majority, 68% said they wish they had attended college so they would qualify for higher-paying jobs, while 43% wish they had gone to trade school to prepare for a specific job.

As for funding college, 54% said they wish they had attended a less expensive school, and 27% wish they had delayed going to college so they could have saved more money first.

The survey also suggests that, for many Millennials, education has yet to translate into financial opportunity. A slight majority of respondents (52%) said that Millennials have less upward financial mobility than previous generations, citing an uncertain job market (21%), the fact that more jobs require higher education (14%), and increased student loan debt (11%) as the top reasons. Over one-third of Millennials (35%) report wishing they had delayed college until they had saved more money so they could reduce the amount of loans they took out.

The survey, conducted for the AICPA by Harris Poll, polled 1,010 adults in March 2015. The National CPA Financial Literacy Commission recommends that before deciding to take out a loan, students should determine their monthly payments, their estimated salary after graduation, and the date they will need to start paying it back. Parents need to help their kids look more closely at the cost of college education, compared to the expected benefits.

Parents have a hard time saying no to their kids, especially in something that has a huge potential impact on their future sustainability. But the choice of college should be made by or with the parents, and factors beyond notoriety, prestige, and glory need to be highly considered. College planning helps to determine which schools are most likely to actually reduce the fees, not just give out loans for the difference.

What you’ve learned about funding and attending college, is valuable information to your children. Without smart college planning, you may be allowing a 17 year old make a $100k decision with your money. Would you let your teen decide which car to buy or which house to buy? No. Funding your child’s education is a major purchase and should be made objectively with your retirement goals in mind.