There was the usual stream of global news. To name a few highlights:

In the meantime, markets marched onward:

In this context, as he’s been doing for more than 50 years, Warren Buffett published his annual Berkshire Hathaway shareholder letter. To put this quarter’s moves in proper perspective, here are two of our favorite bits of Buffett’s usual wit from this year’s letter:

Following forecasts: “If 1,000 managers make a market prediction at the beginning of a year, it’s very likely that the calls of at least one will be correct for nine consecutive years. Of course, 1,000 monkeys would be just as likely to produce a seemingly all-wise prophet. However, there would remain a difference: The lucky monkey would not find people standing in line to invest with him.”

We’ve said it before. One of the few predictions we’ll make is that we’re almost certain to say it again: Unless your own life’s personal circumstances have changed, stay the course as planned. Whenever we can help with that, please let us know.

The following report features world capital market performance and a timeline of events for the last quarter. It begins with a global overview, then features the returns of stock and bond asset classes in the US and international markets. The report also illustrates the performance of globally diversified portfolios and features a report on GDP Growth and Equity Returns. 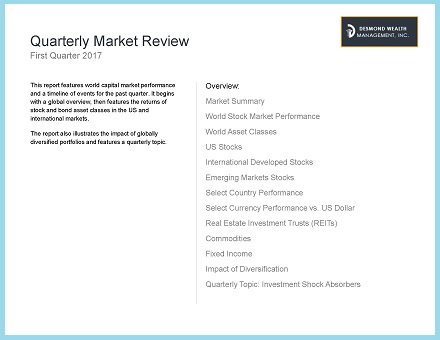